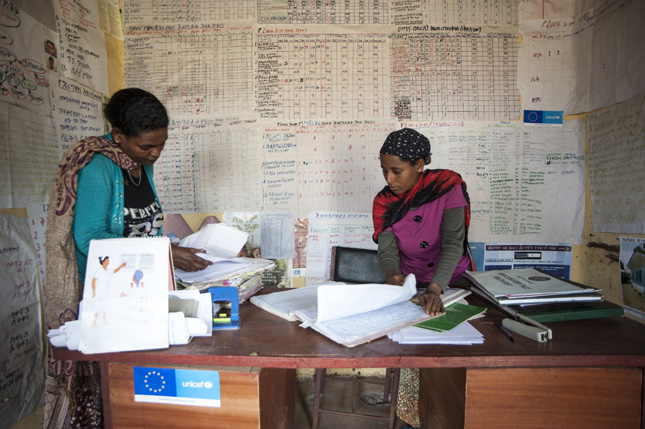 “The aspirations of the 2030 Agenda and the SDGs are really high, and the data that will enable that have a long way to go,” said Rachel Snow from the United Nations Population Fund at a Wilson Center event on July 14, 2017.

The discussion focused on the progress countries are making towards meeting the Sustainable Development Goals (SDGs) on maternal health, which call for reducing the global maternal mortality ratio (MMR) to below 70 per 100,000 live births by 2030, with no single country having an MMR of more than 140. The SDGs also include set goals for reducing under-five and neonatal mortality, births unattended by skilled health personnel, unsatisfied family planning needs and adolescent and at-risk pregnancies.

One of the ways to achieve these goals, said Snow, is by collecting comprehensive and disaggregated data on maternal health in every country that has committed itself to the SDGs. But how can countries collect the most reliable and indicative data, and what are the gaps that need to be filled? Doris Chou of the World Health Organization explained that countries are not all on the same page when it comes to maternal health measurement; some country databases have not been updated since the Millennium Development Goals (MDGs) ended in 2015.

To move into the next era of sustainability and health, Chou said we must engage the hundreds of players in the field to map the current situation. Unfortunately, there are crucial gaps—especially in rural, vulnerable and conflict-ridden areas—that leave much of the territory uncharted.

The 2030 Agenda seeks to address the world’s longstanding health and development challenges through the lens of sustainability. “Sometimes it felt like people wanted to focus on the new things,” Chou said, “but we have to remember there are holdovers from the past that maybe were not always perfectly done before.”

While the SDGs are exciting and promising, Chou suggested it might be useful to conduct a retrospective analysis and refine the work that has already been done in monitoring and evaluation. One area of refinement rests in the nooks and crannies of maternal health terminology. “What do we mean by maternal death?” Chou asked. “There is a definition, but the interpretation of that definition, we found in the MDG monitoring, varied widely.”

For example, who is counted when recording whether there were skilled attendants at each birth, one of the most crucial indicators of maternal health? Chou asked, “Is it the person who is there? Is it the environment that they are working in? And, even if you have the environment, does that person feel empowered to do what they have to do?”

Increased rates of migration also pose a challenge. “If you are a taxi driver but you were trained as a physician in another country, and then come [to the new country], do you get counted as a taxi driver or do you get counted as a physician? Depends who is doing the reporting,” Chou said. Ill-defined answers to these crucial questions lead to misinterpretation and inaccurate representations of the situation.

Snow has found that one of the biggest challenges in collecting data is the lack of disaggregated data. “We are supposed to be locating the people who are the furthest behind,” said Snow, “The preamble [of the SDGs] is that where relevant, we should be able to take every indicator and tell the story…how does this maternal mortality outcome vary by income…age, race, ethnicity, migratory status, disability status, geographic location, or any other relevant location.” According to the 2030 Agenda, countries should have the capacity to collect this data by 2020.

But one of the biggest challenges with collecting disaggregated data is comparability. To yield comparable statistics, Snow said, “UN agencies do model-based estimates for a lot of important health indicators…because it is so incredibly difficult to measure something that, as terrible as it is, remains a relatively rare event in a country.” Model-based estimates, however, typically cannot be disaggregated, making countries’ statistics crucially important. The balance between the two is often hard to establish.

The inaccessibility of some of the most under-resourced groups, such as adolescent girls (ages 10-14), migrants living in urban areas and indigenous groups, presents another obstacle. Chou urged data collectors to pause and think: “Can we make sure that everybody who needs to be at the table is at the table to think this through? For instance…when we talk about measuring essential adolescent services, what is essential? ‘Essential’ to you and me might be very different than ‘essential’ to the adolescent that we are trying to reach.”

Improving the metrics: Quality and quantity

The importance of quantitative data should not be underestimated. Accurate and acceptable data measurement is a priority for pinpointing areas and groups that need the most support and for  implementing the most successful evidence-based interventions.

We also need complementary qualitative data, as understanding the priorities of women and mothers is key to improving their health. But collecting qualitative data on a large scale is increasingly difficult. “How do you measure the warmth of a relationship that the provider had with their client? So we have to come up with something that is a proxy,” Chou explained.

According to Snow, asking questions such as, “Did you get counseling about potential side effects [of family planning methods]? And did you get a choice of methods when you came in and got what you got?” could help make inherently subjective experiences more objective and quantifiable.

“We have to be more strategic and clever in terms of what questions we ask,” said Chou. “[It’s] not about only measuring one dimension of a person’s health, it is about how we can make sense of it all.”